1. The formal in conversational formalism

Seeing Robert Wilson’s The Life and Death of Marina Abramovic (LADOMA) reminded me of his influence on my theatre. I’m interested in the smile of complicity and in the immediate, the rough, cheap and the fast but I also love the beauty and precision, the rigour and evocation of Wilson’s formalism. I long for fly galleries and scrims.[1] As much as I’ve mumbled into microphones and led with jokes and singing songs, there has been colour on the back wall and geometry in the sky.

I moved away from Wilson-esque formalism, perhaps because of personality and ethics as much as aesthetic – I’m not the kind of person to be as controlling as Wilson is – I’m not comfortable with being so bossy. Maybe a fault, maybe a political decision. Probably both.

Also, I live in a different time. Watching LADOMA, I couldn’t help thinking of it as an ode to the artists and art market of the 70’s and 80’s. A retro fantasia of a time when resources and grandeur were available to artists like Wilson and Abromovich.

That ambition and scale feels unreachable for me in these times, in this country. Part personality again, part a stifling culture of scarcity and risk aversion in which scale is purview of celebrity and come-from-aways.

I hope to be proven wrong – by myself, my colleagues, by presenters and the leaders of our art institutions. 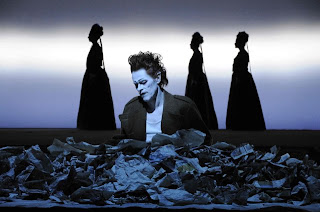 2. The frame of critical responses.

Abramovic has become a celebrity, and the press has latched on to the cult of personality that she cultivates and/or generates and/or performs and/or comments on. Certainly Abramovic is interested in questions of idolatry and icon. It’s present in her body of work. Being a single presence that allows and stands in for all others.

This aspect of her practice is intensifying with the MOMA celebrity, turning her work into a spiritual path with the Marina Abramovic Institute and asking Wilson to make her sixth autobiographical work.

I’m not sure how I feel about this – I’m ambivalent of much of her work as I am about Wilson’s formalism. But I can’t deny it’s consequence and “worth thinking about” nature.

But in much of the press (and maybe the press releases?) there’s a sense that LADOMA is an Ambromovich show.

It’s not. It’s a Robert Wilson show. And their practices are opposite approaches to finding meaning and truth. (See the very good Times Talk with Wilson and Dafoe.)

Abramovic asked Wilson to make the piece and he agreed, and we (writing about it) should take them both seriously enough to wonder why, and what it reveals about the art and artists in this time.

To take the dissonance as part of the work itself. To respect the choices and start from there.